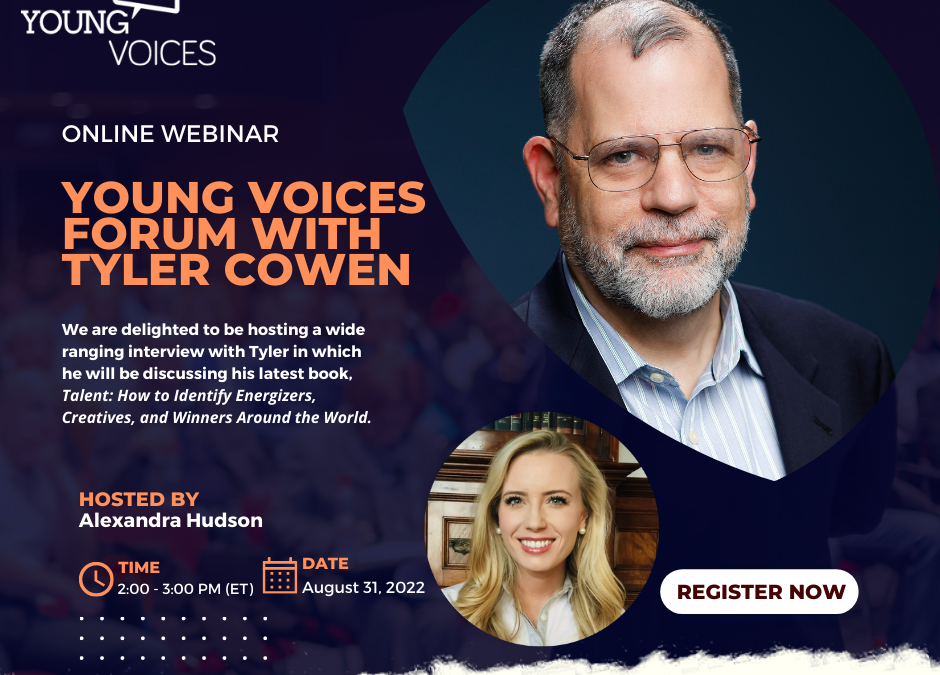 Young Voices is delighted to be hosting a wide-ranging interview with Tyler Cowen in which he will discuss his latest book, Talent: How to Identify Energizers, Creatives, and Winners Around the World.

Tyler is a renowned economist as well as an influential columnist and blogger. Tyler’s work includes coining the idea of State Capacity Libertarianism and pushing back against the social discount rate. He has been published in The New Republic, The Wall Street Journal, and Forbes and is a regular contributor to The New York Times and Bloomberg. In 2011, Tyler was included in The Economist’s nominees for the most influential economists of the decade.

The conversation will be facilitated by author, commentator, and Young Voices alumna Alexandra Hudson. Alexandra is a contributor to Fox News, CBS News and other television outlets, and also contributes to The Wall Street Journal, USA Today, TIME Magazine, POLITICO Magazine, and Newsweek, among other outlets. She has been recognized as among Vancouver’s “Top 20 Under 20,” and her work has been featured in Forbes, USA Today, and The Indianapolis Star, among other local, national and international outlets.

This event will form part of the Young Voices Forum series. Past speakers have included Matt Warner and Tony Woodlief.

The Young Voices Forum with Tyler Cowen will take place from 2-3pm ET on August 31, 2022 on Zoom.