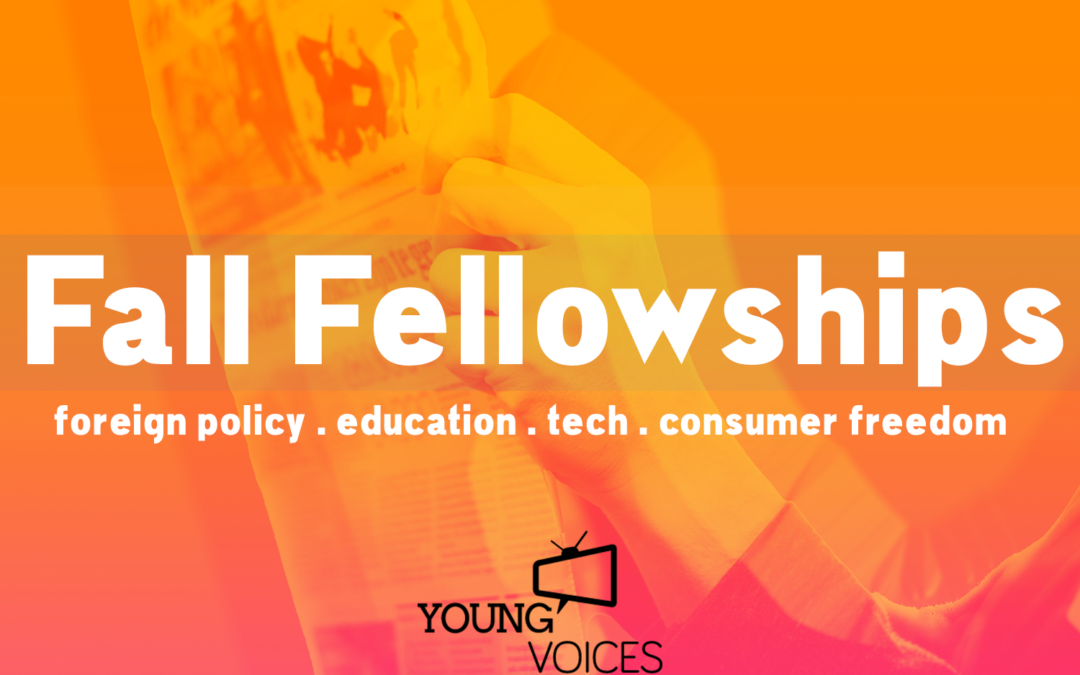 This fall, we’re thrilled to launch our largest batch of policy fellowships on the topics of tech, consumer freedom, foreign policy, and education!

Over the next six months, this talented set of writers will take deep-dives in their respective issue areas, meet with policy mentors from top think tanks, produce six op-eds, and appear on two TV/radio broadcast interviews. Meet the fellows!

The internet is perhaps the strongest living example of the power of free markets to make our lives better. Yet, recently politicians from both the left and right have been calling for the heavy hand of government to regulate the net. Young Voices’ tech fellows will counter these populist urges, defending the free internet from red tape that could permanently hinder its evolution.

Sam Peak is a graduate of Park University and a specialist in immigration policy. His research and writing have been used in white papers for Hill staffers and his commentary has been featured in numerous national and regional publications including USA Today, Reason, the Kansas City Star, and the Orange County Register.

Ryan Khurana is Executive Director of the Institute for Advancing Prosperity, a non-profit focusing on the social impacts of technology. He previously worked at the Competitive Enterprise Institute in Washington, D.C., and the Institute of Economic Affairs in London. He is a graduate of the University of Manchester, where his dissertation was on the impact of Artificial Intelligence on the labour force.

Robert Winterton is Director of Communications at NetChoice, a trade association fighting for free speech and free enterprise online. Before working in tech policy, he worked in digital and social media marketing for political organizations. Robert immigrated to the U.S. almost 5 years ago after graduating in International Politics at King’s College London.

Be it sin taxes on alcohol and tobacco, prohibitions of old conveniences like plastic straws, or overregulation through occupational licensing, the nanny state cannot sleep without suffocating consumers with red tape. These fellows will make the case for human autonomy and individual choice.

Molly Davis is a policy analyst at Libertas Institute, a free-market think tank in Utah. She writes about criminal justice reform, consumer freedom, and individual privacy rights. Her work has been published in The Hill, Wired Magazine, Washington Examiner, The Federalist, Salt Lake Tribune, and more.

Alex Muresianu is a Boston-based writer who primarily writes on topics such as taxes, healthcare, and occupational licensing. Previously, he interned at the Tax Foundation on the federal policy team, worked as an Akin Fellow of Digital Media at the Pioneer Institute, and was a journalism intern at Reason.

Jacob James Rich is a policy analyst at Reason Foundation. His research interests include the political economies of healthcare and drug policy. J.J. Rich is a graduate of Eastern Michigan University, holding master’s degrees in mathematics and economics.

America’s military-industrial complex still maintains its extended presence around the globe as the War on Terror near two-decades and proponents of endless conflict are beating the war drums for Iran and North Korea. Young Voices seeks to empower our foreign policy fellows to challenge this third rail of American politics and call for a more harmonious world.

Jerrod A. Laber is a Washington-based foreign policy writer and journalist, who also writes about Appalachia, issues of race in America, arts & culture, and cities. His work has been published in The Independent UK, Defense One, Washington Examiner, The National Interest, The American Conservative, the Columbus Dispatch, Real Clear Defense, and 100 Days in Appalachia, among other outlets. He is currently a Fellow for Defense Priorities.

Zachary Yost is a Pittsburgh based writer and freelance researcher. His work has been published in various outlets including The American Conservative, the Mises Wire, the Washington Examiner, The National Interest, and Libertarianism.org.

Alexander C.R. Hammond is a Research Associate at the Cato Institute’s Center for Global Liberty and Prosperity. He is also a Senior Fellow at African Liberty. Hammond frequently writes about economic freedom, globalization and human well-being. His works have been translated into multiple languages and have been featured in: Reason, National Interest, Washington Examiner, Newsweek, CapX, El Cato, Academia Liberalismo Económico, Foundation for Economic Education, Contrepoints, and the HumanProgress.org blog

Despite being one of the most prosperous nations in the world, the United States is consistently in the middle of the pack among developed countries in student achievement. These education fellows seek to make the case for school choice, diving into state-specific policy battles across the country.

Christian Barnard is an education policy analyst with the Reason Foundation and writer for Young Voices. His work has been featured in multiple publications such as the OC Register, The Hill, Orlando Sentinel, Washington Examiner and on SiriusXM, WJLA DC and FOX 5 DC.

Rachel Tripp is a graduate of the University of Massachusetts, Amherst with a B.S. in public health sciences, and is currently pursuing an M.A. in nonprofit management and government at the Harvard Extension School. Rachel is a lifelong advocate of conservative ideas has helped to manage numerous Republican campaigns.

Tyler Bonin is a teacher and educational consultant in North Carolina. He holds a B.A. from Campbell University and an M.A. from Duke University. Tyler is also a veteran of the U.S. Marine Corps.