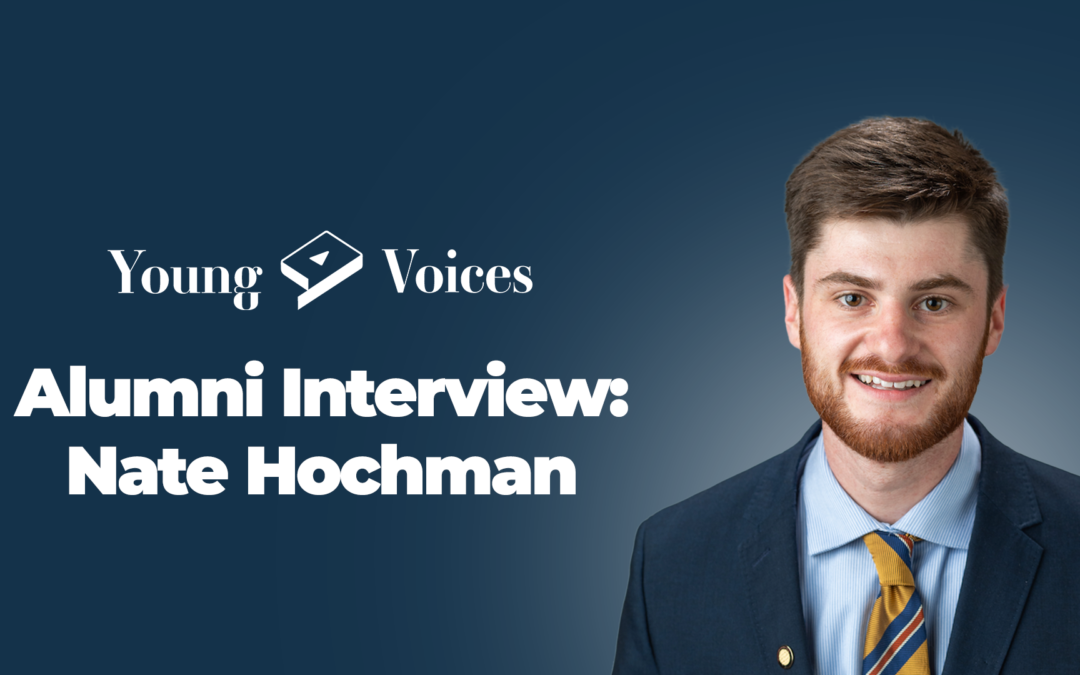 This week’s alumni interview is with journalist Nate Hochman. He is a staff writer at National Review.

What led you to pursue a career in journalism? Tell us about your career path.

Well, the easy answer is I was always useless at math and science, so something writing-related was really the only option. But more specifically, for my sins, I’ve always liked discussing and debating big ideas — I was a political theory major in college; mea culpa — and political writing is a vocation where you get the chance to do a lot of that. (Particularly on the conservative end of the spectrum). I entered the American Right at a time of enormous upheaval, uncertainty and internecine disagreement, amid a fascinating ongoing debate about what it means to be conservative — our priorities, what we should and shouldn’t stand for, how we should approach the defining issues of our time, and so on. The best way to actually get to have a voice in that conversation was to write for conservative publications. So in college, that’s what I did; first during a summer internship at National Review (where I now work full-time), then with a Young Voices fellowship, and finally, once I had worked my way up — with YV’s indispensable support — via my own brand.

You’ve dedicated a lot of your writing to a discussion on the future of American conservatism including an opinion piece in The New York Times. How do you think the conservative movement in the US is changing and what do you see as its future direction?

That’s the question of our time! The short answer is: Probably in some ways Young Voices writers and supporters will like, and in a lot of ways they won’t. As I see it, the shift in the center of gravity within conservatism is a long-overdue response to a radically new set of issues and challenges facing today’s Right, which are vastly different from those faced by generations past. That requires the creative application of conservative principles, in a way that will redound to a very different policy agenda than that of, say, the 1984 Reagan platform. The so-called “New Right” (not a very useful term for a variety of different reasons, but one we seem to be stuck with) certainly has factions that want to facilitate a radical break with traditional conservative principles, but I reject the criticism that all of the trends within conservatism over the course of the past half-decade are a betrayal of the movement’s most fundamental long-standing tenets.

A conservatism for our time is going to be more skeptical of foreign interventions and military adventurism abroad than its Cold War predecessors, and — partially as a result — more skeptical of the security state and federal law-enforcement agencies like the FBI and the CIA. That’s the part our libertarian friends will probably like. The part they might be dismayed by is that the growing skepticism of neoconservative foreign policy is part of a broader conservative nationalism that includes a concomitant shift towards a more hawkish posture on immigration and trade, a more aggressive approach to culture-war issues, a new suspicion of big business, and an embrace of Irving Kristol’s “Two Cheers for Capitalism” philosophy of markets; a tool, rather than an idol. As I see it, both libertarians and conservatives (of all stripes) are trying to advance a core set of priorities — ones that often overlap, but are also occasionally at odds. The shift in conservatism will present new opportunities for libertarian-conservative collaboration, even as it closes off old areas where we might have previously seen more eye-to-eye. We should all be thinking coalitionally: Have the big, important fights when and where they’re necessary, but be willing to work together to advance shared goals when possible.

How did Young Voices help you become a more well-rounded person and writer?

I owe an enormous amount to Young Voices. To this day, it really is a unique program — I can’t think of anything else like it. It’s very difficult to simply waltz into political writing; who are you going to pitch to? Why should they care? How do you know what they’re looking for? There’s no real textbook for all of that — it’s a learned skill, like anything else. Young Voices gave me the confidence and the experience to build that skillset — and from there, a personal brand in this industry. For a young writer with no prior experience, just getting a few bylines under his or her belt is revolutionary. From there, everything else Young Voices provides — learning about the pitching process, becoming comfortable with media hits, getting coaching from industry veterans, and so on — really makes the organization an invaluable one-stop shop for right-leaning (or at least, liberty-minded) young people seeking to make their mark in US politics.

You’ve been on the frontlines of breaking news stories over the past year, perhaps most notably with your coverage of the Georgetown University’s response to the Ilya Shapiro controversy. What’s your advice for young journalists on finding and reporting on stories?

Here, I’m going to outsource to a section of a speech, delivered to a room of young conservatives, from a very wise (and handsome) young man named Nate Hochman this summer:

So much of conservative media—and conservative politics in general—is reactive. We spend our time reacting or responding to the Left. But that’s an inherently defensive posture. It makes it very difficult to win when you’re playing on the other side’s terms.

Part of all this is simply a question of power. The constellation of mainstream, credentialed, “reputable” news outlets is very powerful. In the short term, there isn’t much we can do about that.

But part of it is a choice. Conservatives have adopted this defensive crouch by spending our time writing op-ed after op-ed about how biased the media is, about what this or that progressive pundit or Democratic politician said, and so on. And all of that is important, to a degree. I certainly do plenty of it myself. Part of our job is to hold people accountable—especially the ones that the mainstream media doesn’t.

But if we do that at the exclusion of other kinds of writing and journalism, we’ll never actually be able to set the terms of debate. And we’ll always be playing on a field where the referees work for our opponents.

The good news is, we don’t have to do that. The thing about the mainstream media’s bias is that they’re only really interested in uncovering half of the stories that are worth telling—and frankly, a lot of the stories they do tell aren’t particularly interesting or worthwhile.

What that means is that there is a cornucopia of stories for all of you to go out and find. Stories that matter, but that aren’t being told. All you have to do is go find them.

Which published works or media appearances Young Voices placed for you are you most proud of?

This TV hit on Fox 5 DC about the final days of the 2020 campaign, and this polemic I wrote about the Democrats’ government child care scheme for The American Conservative.

You’re currently a staff writer at National Review. What’s the best way to follow your work? And do you have any upcoming projects you’d like to share with us?

You can follow me on Twitter @njhochman, although I wouldn’t wish the heavy burden of following me on Twitter on my worst enemy. That’s where you’ll find any relevant info about new projects I’m working on, when they become public. Stay tuned!

Thanks so much to Nate for his thoughtful answers! Stay tuned for our next alumni interview.