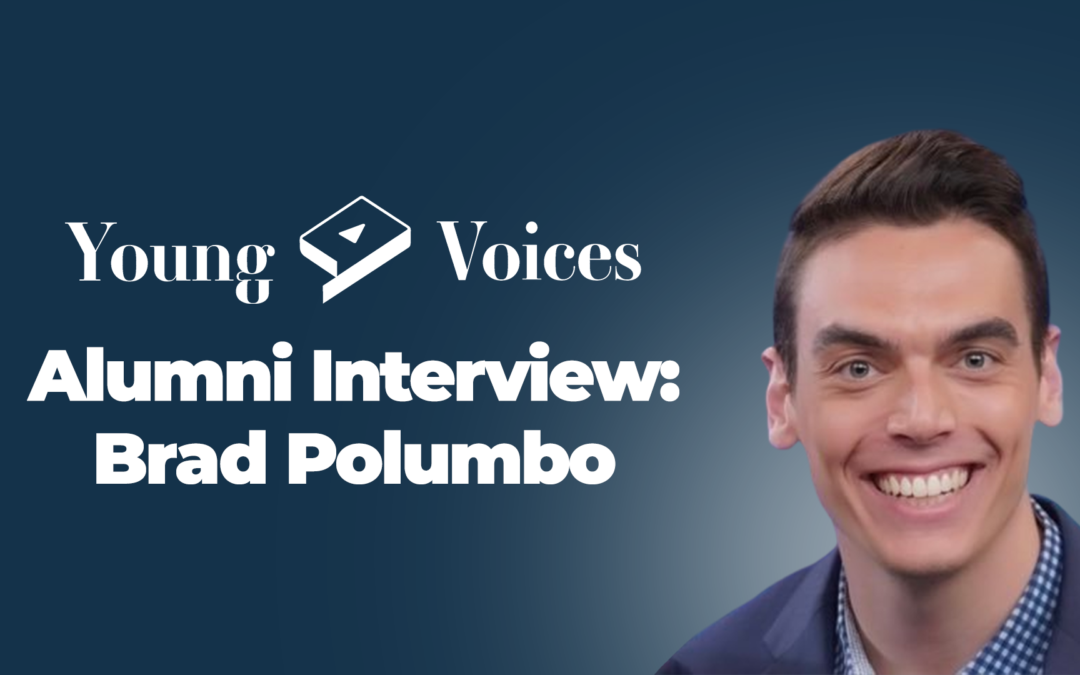 This week’s alumni interview is with journalist and economic analyst Brad Polumbo. He currently works as a policy correspondent for Foundation for Economic Education (FEE) and an Opinion Contributor for The Washington Examiner. Brad is also a cofounder of the media nonprofit BASEDPolitics.

What led you to the world of media and policy? Tell us about your career path.

I started out as a college student thinking I wanted to go on to law school and become a lawyer. However, I started writing for my campus newspaper as something of a side-hobby, and after having a few controversial articles get noticed nationally, Casey Given reached out to me and encouraged me to apply to Young Voices. I did, and went on to write my first professional articles for outlets like the Washington Examiner, USA Today, the Daily Beast, and National Review. I loved my experience with Young Voices and it actually showed me that I really wanted to pursue journalism full-time, which I then did after college by taking a job at the Washington Examiner full-time.

You’ve written a lot about economics in publications such as FEE, National Review, USA Today, RealClearPolitics, and more. You’ve debunked many myths about the free market. What do you think is the biggest misconception about capitalism and what’s a top economic reform you’d like to see implemented?

I think the biggest misconception about capitalism is that it’s a zero-sum game: some people get rich at the expense of others. In fact, true free-market capitalism enables trades that are mutually beneficial and the profit motive incentives fulfilling the needs of others. One top economic reform I’d like to see is a decrease in payroll taxes, which are a regressive tax on jobs.

How did Young Voices help you become a more well-rounded person and writer?

Having experienced editors revise my work helped me grow enormously as a writer. Even more importantly, though, the simple action of repetition, of writing dozens of Op-Eds, forced me to improve my skills. I went from initially spending several days on each article to now where I just need about 2 hours and a semi-stable internet connection to write something even for a major publication like Newsweek or the New York Post.

You’ve appeared many times on major outlets including Fox News, Fox Business, Sky News, and the Glenn Beck Radio Show. You even made an appearance on Dr. Phil! What’s your advice for pro-liberty young people pursuing a career in media?

Whether you like it or not, people are drawn to personalities, not substance. You need to be personable and entertaining and casual and then bring substance in after you have hooked audiences and attracted eyeballs. Too many young people in the liberty movement attempt to lead with the dry philosophy or dense statistics and end up getting ignored.

Which published works or media appearances Young Voices placed for you are you most proud of?

Young Voices helped me get my first articles published in National Review and the Daily Beast, which was very cool because they are national brands I was already very familiar with and suddenly as a college student I saw my name in their pages. It was a surreal experience!

Along with fellow Young Voices alum Hannah Cox, you’ve launched a pro-liberty media nonprofit called BASEDPolitics. Can you tell us a little bit about BASEDPolitics and the role it is playing in our media ecosystem?

Based is a popular internet slang word that is mostly used in political contexts to say that something is upfront, on point, or especially true. We’re a next-generation multi-media hub committed to providing “Based” commentary and reporting. At BASEDPolitics, we are committed to providing educational, engaging content that advances free markets and individual liberty. We strive to teach people how to think, bridge the partisan gap, and form a community with diverse audiences. We’re not satisfied with preaching to the choir or being the big fish in a little pond—our goal is to make liberty go viral.

In particular, we seek to produce content for platforms like TikTok, Instagram, and YouTube in order to reach Gen Z with our message in a way that old-fashioned liberty movement media and journalism efforts do not.

Thanks so much to Brad for his thoughtful answers! Stay tuned for our next alumni interview.